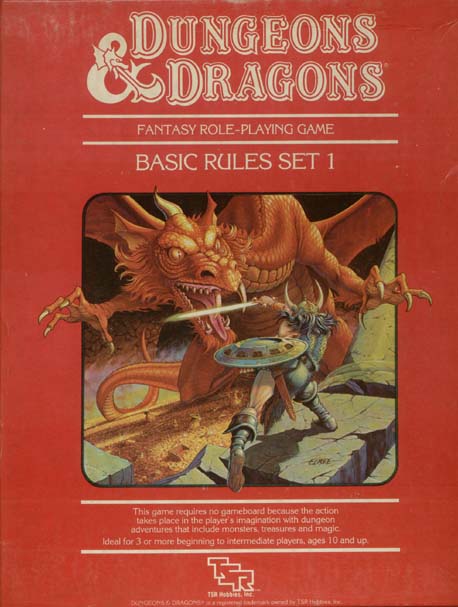 To keep track of the party marching order, line up the miniature figures on the playing table. You may use a large piece of graph paper to draw the rooms and corridors found by the characters, and simply move the figures around on the paper. Several types of more permanent playing surfaces are available in plastic and vinyl, and the rooms drawn on them can easily be erased.

Scale movement: When using miniature figures on a playing surface, a ruler is used to determine distance moved. One inch represents 10 feet. A movement rate of 60′ per turn means that the figure moves 6 inches each turn. Spell ranges and other ranges are easily determined when an accurate scale is used.

Organize your party by showing which characters are where. Show marching order for a 10′ passage, a 20′ passage, door openings, etc.

Always prepare for rear actions as well as frontal combats. Assign one individual as leader. This character will “call”, i.e. tell the referee where the party will go and what they will do. Miniature figures are of great aid here. The DM will usually require a marching order to be drawn on a piece of paper if figures are not at hand.

USE OF MINIATURE FIGURES WITH THE GAME

The special figures cast for ADVANCED DUNGEONS & DRAGONS add color to play and make refereeing far easier. Each player might be required to furnish painted figures representing his or her player character and all henchmen and/or hirelings included in the game session. Such distinctively painted figures enable you to immediately recognize each individual involved. Figures can be placed so as to show their order of march, i.e., which characters are in the lead, which are in the middle, and which are bringing up the rear. Furthermore, players are more readily able to visualize their array and plan actions while seeing the reason for your restrictions on their actions. Monster figures are likewise most helpful, as many things become instantly apparent when a party is arrayed and their monster opponent(s) placed. Furnishing such monsters is probably best undertaken as a joint effort, the whole group contributing towards the purchase of such figurines on a regular basis. Be very careful to purchase castings which are in scale! Out of scale monsters are virtually worthless in many cases. As a rule of thumb, HO scale is 25 mm = 1 actual inch = 6’ in scale height or length or breadth.

Figure bases are necessarily broad in order to assure that the figures will stand in the proper position and not constantly be falling over. Because of this, it is usually necessary to use a ground scale twice that of the actual scale for HO, and squares of about 1 actual inch per side are suggested.

Each ground scale inch can then be used to equal 30 linear feet, so a 10’ wide scale corridor is 3 actual inches in width and shown as 3 separate squares. This allows depiction of the typical array of three figures abreast, and also enables easy handling of such figures when they are moved.

While you may not find it convenient to actually use such figures and floor plans to handle routine dungeon movement, having sheets of squares for encounter area depiction will probably be quite helpful. If you do so, be certain to remember that ground scale differs from figure scale, and when dealing with length, two man-sized figures per square is quite possible, as the space is actually 6 scale feet with respect to length. This is meaningful when attacking a snake, dragon, etc. if characters are able to attack the creature’s body length. With respect to basically bipedal, erect opponents, scale will not be a factor.

Details of preparation and painting of miniature figures for the game are not germane to this work. Your hobby supplier will have an assortment of small brushes and paints for such purposes, and you may inquire there as to the best techniques of painting.

Various products such as modules, playing aids, and miniature figurines will be most helpful in establishing and maintaining an interesting and exciting campaign. There are so many such products available that it is not possible to detail each here, but some guidance can be given.

Paper products range from record sheets for characters and special screens for the DM, which contain frequently-consulted charts and tables on his or her side, to complete dungeon or world scenarios. TSR provides a broad selection of such goods, some of which are listed at the back of this work.

You can obtain a complete list by writing to TSR at the address shown on the cover and asking for a current catalog. The outlet for TSR products in Great Britain is: TSR Hobbies (U.K. Limited), the Mill, Rathmore Road, Cambridge, CB1-4AD England. The only other source of approved and official AD8D material is Judges Guild, 1165 North University Ave., Decatur, IL 62526. Judges Guild publishes a large and continually expanding line of materials, and you should contact them for their current catalog. While there are many other works which appear to be useful in a campaign, only those bearing the ADVANCED DUNEONS 8 DRAGONS logo and approval mark should be used.

Miniature figures used to represent characters and monsters add color and life to the game. They also make the tosk of refereeing action, particularly combat, easier too! In combination with a gridded surface, such as the DUNGEON FLOORPLANS (to be published by TSR in the near future), these miniatures will add a whole new dimension to your playing enjoyment. It is suggested that you urge your players to provide painted figures representing their characters, henchmen, and hirelings involved in play.

The monsters can be furnished by you – possibly purchased through collection of small fees levied on each playing session. The OFFICIAL ADVANCED DUNGEONS & DRAGONS miniature figures will be released by Grenadier Models, POB 305, Springfield, PA 19064, about November 1979.

These figures are the only ones which comply in all respects to AD&D specifications and the ADBD MONSTER MANUAL. Contact Grenadier for an up-to-date listing of available figures. Other approved lines of fantasy figures APPROVED FOR USE WITH ADVANCED DUNGEONS 8 DRAGONS will be offered by select manufacturers. Always look for the name, ADVANCED DUNGEONS & DRAGONS, and the TSR approval mark before purchasing figures for your campaign.

USING MINIATURES
Some players like to use miniatures, counters, or other tokens to represent their characters, particularly in a battlefield situation. Miniatures showing the location of the PCs, NPCs, and terrain features can be useful visual aids. They help people see who is closest to the door, which margr stands where, and who will be crushed if the dangerously
weak part of the ceiling caves in.

Often, players who use miniatures also use a grid to represent distance. If you do this, it’s probably best to say that each 1-inch (2.5 cm) square represents about 5 feet (1.5 m). Simply move your figure the right number of squares; for example, a short
distance would be 10 squares.

However, a grid isn’t necessary in Numenera.  Since most things have one of three possible distances—immediate, short, and long—that’s all you need to worry about. Thus, you could cut three lengths of string: one 2 inches (5 cm) long, one 10 inches (25 cm) long, and one 20 inches (51 cm) long. If something has immediate range, stretch the 2-inch (5 cm) string from the origin point to see how far it goes. Any character whose figure is within 2 inches (5 cm) of another figure can make a melee attack against that figure. (The attacker is assumed to move closer to the target, so slide the figures together.) If a character wants to move a short distance, use the 10-inch (25 cm) string to measure from her starting point to her intended destination. If the string can reach that far, so can she. For long range, anything you can reach with the 20-inch (51 cm) string is in range. Soon, you’ll find that you can eyeball the distances—precision isn’t that important.

In some games that use miniatures, the size of the miniature’s base is important. In Numenera, such precision isn’t necessary. However, it certainly helps if larger creatures have larger bases, representing that they take up more room.

GMs can also designate some creatures “huge.” Huge creatures are 20 feet (6 m) tall or 20 feet (6 m) long. For them, immediate distance is a string 4 inches (10 cm) long—or four squares on a grid— and they don’t have to move to make melee attacks.

As a rule of thumb, the maximum number of attackers that can attack a single creature is the same as the number of figures whose bases can fit around the creature. In general, this means that larger creatures can be attacked by more assailants.

When you use miniatures, some aspects of the game become more important, including range, movement, and special effects that move characters. If a character is knocked back, move his miniature back 1 or 2 inches (or squares), as appropriate.

That means terrain becomes important, too. If a deep chasm is nearby, the players need to know exactly where it is in relation to their figures in case they have the opportunity to knock a foe into that chasm (or face that same risk themselves).

Likewise, things to hide behind, the layout of interior chambers, and so on become important and must be depicted along with the miniatures. Many people enjoy playing this kind of game on a dry-erase or weterase surface so they can draw the features and place
the figures right in the action. Sketching them on paper works fine, too, as does using books, pencils,  or other things to represent ledges, walls, and so forth. And, of course, terrain pieces can be used for extra flavor. Some pieces are made of paper to keep them inexpensive.

The downside to using miniatures is that the exacting detail they offer sometimes gets in the way of the GM’s narrative control. For example, without miniatures, she can use GM intrusion to say, “You were standing on the trapdoor when it opens.” With miniatures, a player usually knows exactly where he is standing at any given moment.

Also, psychologically, miniatures seem to encourage combat. If you place a miniature on the game table representing a new creature that the PCs have encountered, some players assume that they need to engage with it in tactical combat rather than talk to it, sneak past it, or try some other course of action. (p.116-117)

This site uses Akismet to reduce spam. Learn how your comment data is processed.